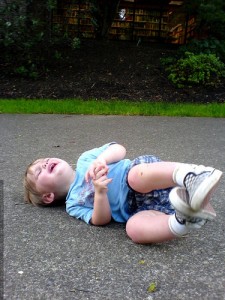 For the child, a temper tantrum feels like swirling in the middle of a tornado. It is frightening and there is no way of knowing when or if it will end.

A temper tantrum is not a parent’s favorite aspect of their child’s development. Tantrums are often accompanied by shrill screaming and physical kicking and hitting. And they result from “unreasonable” situations.

“I asked him to put his coat on, and he acted like I had pulled his arm off.”

“She wanted the blue plate that was in the dishwasher. I gave her another one and she threw it across the room.”

“All I did was tell him it was time for a bath. You’d think I told him I was leaving him for good.”

“What doesn’t he understand about ‘no’?”

Our adult reasoning brains have forgotten what it is like to be a child trapped in a body that often will not do your bidding. Impulses take over body parts, and words are emotional and dramatic and do not mean what they say. Our adult brains, together with our parenting culture, tell us that we have to stop this unpleasant and inappropriate behavior because if we don’t, it will never stop. So we isolate, punish, threaten, scream back at, shame or ignore—all of which tells the child she is being bad. Exactly the opposite direction we should take.

In the words of a 13 year old autistic boy describing his meltdowns in The Reason I Jump (a wonderful book), “It’s this feeling of helplessness that sometimes drives us half crazy…. When this is happening to us, please just let us cry, or yell, and get it all out. Stay close by and keep a gentle eye on us, and while we’re swept up in our torment, please stop us from hurting ourselves or others.” Granted he is autistic, but this is surely the experience of a three or four year old when the tornado of overwhelming feelings hits with no ability to filter the emotions out with reason. It’s pure development in a young child. When they are stressed (read: don’t get what they want or think they have to do what they don’t want), they lose it. This is normal and the most important time for parental compassion.

Tantrums in a two to four year old child are developmentally appropriate ways of releasing pent up emotions that children are not yet capable of managing—they cannot do anything but have a tantrum when stressed, overtired, or thwarted.

We want our children to learn that all emotions are normal and (eventually) in their control. Not that they are bad and shouldn’t feel the way they do. Young children are in every way egocentric and easily lose control when they are frustrated. Maturity will help them find that control. We need to trust their development. Normalizing their feelings does not mean allowing them to do or have what they want. But letting them know that their desires are natural and understandable helps them to gain better control of them.

When a child has a tantrum, she is in a very scary place. She doesn’t want to be there anymore than her parent wants her to be. Imagine being swept up by a tornado, and then imagine being three.

What to do when a tantrum hits:

An older child still having meltdowns should be managed in the same way.

Lacking good impulse control, children can have tantrums for many years. It always means your child cannot yet manage overwhelming feelings. This makes it all the more important for compassion and support and to continue to follow the steps above.