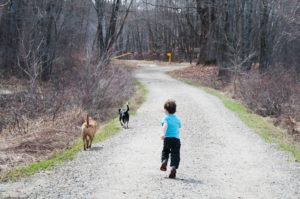 When little children fall and skin their knees, drop things that break, get pushed around by other kids, run outside without a coat, don’t eat a thing when it’s put in front of them—our “mother bear” instinct comes out and we do everything we can to protect them. Of course, our job as parent is to make sure they are warm and fed and unharmed. But do we do too much?

Is our job to be protector? To a certain extent. We can’t protect them forever so we must raise them to be well prepared for protecting themselves long before that day arrives. We have gotten more and more careful and are asking our children to be more and more careful. Are we unintentionally creating children who are afraid and anxious? Aren’t we asking them to tend to our fears instead of finding out for themselves what life has in store?

It used to be that children were pretty much on their own, except when at school. They knew the neighborhood kids and their parents and what to do if they got in trouble. Now we barely allow them to be without adult supervision for more than a few minutes. Every activity is adult run.

It may seem that the time when our children need to be able to fend for themselves are far away. However, their capability to bound and rebound, to fall and get back up, to gain resilience begins in toddlerhood. Children need to do for themselves as soon as they are able. They also need us to know the difference between when they can’t do something alone and when they can but want or need interaction with us that comes when we help. For instance a five year old is perfectly capable of dressing herself but will feign helplessness, much to the chagrin of the parent, when what she really wants is the close physical interaction of being dressed. When we understand the desire, we are more able to put aside our worry that she’ll never be able to do anything on her own, and actually enjoy helping her get dressed.

Building resilience is not always about pushing children out the door but more about listening to them and taking their lead more than we tend to. Children often know what is best for them when we often fear that they have no idea and will fail without us.

~ wants to go out without a coat, wait until he gets cold instead of forcing him into it.

~ says she’s not hungry, let her wait until her body tells her she’s hungry without running after her with one more bite.

~ expresses emotion with dramatic words, hear him out before telling him not to use such language.

~ tells you what she wants, ask her how she can make that happen instead of telling her you can’t afford it.

~ falls, wait until he expresses hurt before assuming he is hurt.

~ breaks something, hand her a dustbroom and dustpan to clean it up instead of telling her she should have listened when you told her not to touch.

~ gets called names at school, ask him how he felt and what he wishes he could say to the name callers instead of telling him what to do about it.

~ wants you to play with her, follow her lead in the play rather than telling her how it should be done.

~ wants to light a candle, teach him how to strike a match instead of forbidding something that could be dangerous.

~ doesn’t want to hold your hand or wants to wander around in a populated place, decide on a specific meeting spot in case anyone gets lost.

~ wants to run and climb and jump, allow risky play.

Obviously these suggestions are relative to age-appropriateness, but my hope is to get you to think about how you might be over-protective in areas where capability, coping, self-esteem, and resiliency can be gained if you let go a little. The Atlantic magazine article on “The Land”—playgrounds in the UK that look more like junkyards and allow risky play—may raise the hair on your head but it is in answer to the over-protection that so many of us are putting in the way of raising capable children. What can you learn from it?

When young children are allowed to take risks and learn from them, they will be more adept at handling and making smart decisions about the risks they engage in as teens and young adults. They will be better learned in the natural consequences of their behavior so their pre-frontal cortex thinking will take more precedence when you are not around to protect them.