Q. My son will make a negative statement about anything and then immediately follow it by a more extreme version, e.g. “I want to die…I have wanted to die since I was born!” OR “No, I don’t know that you love me…I have NEVER known that you love me.” I don’t know how to react to these statements – they take me by surprise. Is it just his way of expressing the magnitude of his feelings?

A. Yes—and his words are also telling you that you are not listening to him.

The words of a child tend to get louder and more dramatic when certain needs (they have no idea what) are not getting attended to. This is one reason parenting is the hardest job on the planet—we have to interpret words and behaviors of our kids; not take them at face value but dig into the emotional state that prompted them. Your son most likely does not mean he wants to die. But he could mean that he doesn’t feel acceptable or good enough or heard, and so life at times is painful.

We are so quick to get our kids to see things how we think they should see them. You want him to know immediately that of course you love him, but as soon as you come back with that, he feels unheard—because that’s not really what he meant. We spend way too much time being rational from an adult point of view and have a hard time getting into the child’s point of view. 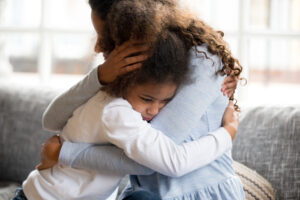 It’s not about fixing it—changing how he sees things, making him feel better. It’s about connecting—letting him know that you get it. Instead of, “Of course I love you,” try, “Oh my goodness, that must feel so awful to think I don’t love you. That’s got to really hurt. I wonder if you think that because of something I said or did.” If you have a clue why he could be upset try, “I bet you’re feeling bummed because I told you to get off your device. I get that. I’m sure I would be too if I were you.” Notice I did not ask any questions. I made statements so he does not feel on the spot to answer. He is much more likely to respond reasonably to your statements and will be happy to tell you if you’re wrong.

When Fear Takes Over

It’s hard to go right to his feelings and point of view because the words he is saying are very upsetting to you—most likely his intention. You want to quickly tell him how wrong he is. You see? Your rational correction tells him he’s wrong. So, in his mind, he is wrong. When you tell him what you want him to think you deny him and make it about you. You want him to be happy and know you love him. It’s hard to look at why he thinks you don’t.

Parents of course fly into fear when hearing words about dying, hating everyone, wishing never to have been born. We don’t ever want to ignore words that send an SOS, but we also don’t want to freak out when a child is being dramatic to get the attention they need. Context is everything. The important thing is never to ignore strong words. Know that your child is trying desperately to get you to pay attention to something, and if you ignore him, he feels unimportant and things get worse.

When he says he wants to die, instead of, “Why would you want to die? Do you realize how good you’ve got it?” or shouting “Oh my god. What are you talking about?” stop everything you are doing, go to him and get on his level. Try, “Wow, you feel so strongly about this (if you know what ‘this’ is, state it). It sounds like I haven’t gotten how strongly you feel. It must be terrible to feel like you don’t belong here. I want to hear what it is that makes you think that.” Or you might simply say, “Could we have a hug?”

When You’re both Upset

If his anger stems from a power struggle you are both in, you may be very upset yourself. In which case, use his dramatic words as a kick in the butt to stop yourself from engaging. Breathe and wait until you are calm. Then come back with the repair words above.

When Your Child is Stuck in Negativity

If your child is in a never-ending loop of negativity and self-deprecation, you will need to look at the bigger picture. Are things coming to a head from feeling under pressure for a long time? How can you release some of that pressure? Is he a perfectionist who is terrified of failing? You must first do all the connecting work above before getting into problem solving.

Try some exercises with him to identify various voices in his head. You might draw his head with lots of comment bubbles so he can fill in the voices. For instance, there might be a voice telling him he can’t do math and will fail. Another voice might tell him he’s a good video gamer. Another tells him he can’t be the happy kid his mom wants him to be. Still another tells him he never gets anything right, etc. etc. See if the two of you—at a time when all is good—can come up with a list of voices. Then name them. He must be the one who determines what they say and assigns names. Then whenever he gets into a negative loop, ask him who it is who is talking in his head. Perhaps eventually he’ll be able to bring in a counter voice to tell the negative one to shut up!