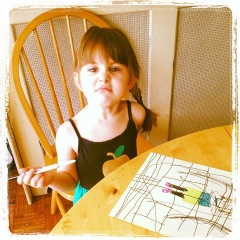 Did you ever have something really good happen that you had mixed emotions about? Ever dip into a panic right before you got married or had a baby?
Have you ever been offered a job you sought only to wish you hadn’t gotten it?
Have you ever had times when you are very emotional but couldn’t describe what you were feeling or why?
Did you ever think you were just plain crazy?

Of course you did.

Now imagine being two. Or four, or six, or twelve. In an immature stage of development, confused, overwhelming emotions spin around inside a child’s head like a tornado, the child doesn’t know what is happening, and the result is unwanted, inappropriate, out-of-control behavior.

If you were not experienced enough to know that this is only temporary, you’d probably think, “Is this how I’m going to feel forever?” Face it. At age forty or fifty you think that.

So when a young child is up and down emotionally, he understands his feelings a lot less than you do and has no way of explaining himself. So, “What’s wrong? How do you feel about that? Why are you so upset/angry/sad?” are the worst possible things you can say to an upset child.

My two year old grandson has just become the big brother to twins. He shows genuine affection towards them, is playful with them and seems proud to be a big brother. At the same time, he has fallen a lot, gotten bruises and scraps and 8 stitches. He has screamed, “No babies” and “I want to punch the babies.” And he’s having a very hard time sharing any of his toys with any other child. To ask him why he is saying and doing what he is would be pointless. So why do we do it?

I often ask parents how much of the time they spend at their personal best. As you can imagine, I get a lot of laughs and self-deprecating remarks. So then, why do we expect our children to be at their best? We learn what they are capable of and then expect that all the time. If someone expected that of us (other than at work), we would probably not be friends.

When you tell your kids you get it, it doesn’t mean you allow it. It means that you can understand why they feel/think/wish for what they do. That doesn’t mean you’re going to fulfill their every wish or condone their desire to punch out their brother. We all just want to feel understood.

In the same way, young children who don’t yet trust their feelings want to know that you understand so they learn their feelings are always okay and we all have them. When big emotions feel overwhelming, it is very validating to hear a parent say, “You were really angry when I said you couldn’t have ice cream. You wanted to hit me and I stopped you, which made you even angrier. Then you cried really hard, and I got mad too. We both got really mad, didn’t we?” In this way, you mirror what happened for your child so he feels understood and accepted. In this regulated state, he can think clearly and learns to trust.

When someone names what is going on for us, it feels extremely soothing (that’s why people pay big bucks for therapy). I once had my favorite car stolen in NYC. One of my friends said, “It’s only a car.” I felt wrong for feeling upset and certainly unwilling to share anymore with her. I wanted and even needed to hear, “Oh how awful. You really loved that car.“

Have you ever said or done something you didn’t mean? And then later apologized and felt better when you were forgiven? Why don’t we give our children the benefit of the doubt, know that they reacted impulsively, and give them time to take it in—experience natural consequences. Instead we jump down their throats, treat them like budding criminals, punish and force phony apologies. That’s what brings on defensiveness. When we feel understood, we are in a much better place to solve problems and make amends.