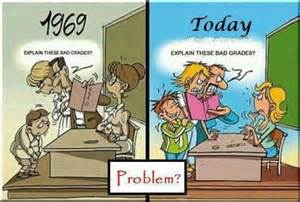 “These kids today” are the words out of every older generation referring to the generation about to replace them. It’s hard to accept change. Every generation thinks they are better than the next and the youth are messing everything up and doing it all wrong.

What do the following have in common?

Call me a member of the older generation, but here’s how I see it: Baby boomers were born and raised in post WWII during an economic recovery and unprecedented prosperity. They (we) got to do more of what we wanted than our parents did. We also learned to distrust government during the Nixon-Vietnam War years. We actively demonstrated, thumbed our noses at the establishment and were the first to step out of the footprints of our parents to set our own way. The establishment included our parents. Most of us didn’t like the way we were brought up to be obedient and were determined to do it differently.

So here we were, in limbo, raising the next generation. We wanted to do it differently but didn’t know what that meant other than the opposite of strict obedience, remaining silent, doing for others and never for ourselves. After all, obedience backfired on our parents. They raised a whole generation who turned disobedient.

We were scared when our kids were born. We had left hometowns and families to make our own way. We didn’t want our children to feel the way we did—powerless, voiceless, invisible and unimportant (girls, especially), raised on fear. So we tipped the scales and fell to the opposite end of the continuum. A lot of us became permissive, laissez-faire, and indulgent—all in the name of progressive parenting. Our babies would have the best, our toddlers would learn the most, our children would have a variety of opportunities, our kids would be the smartest yet—all because we were no longer squashing them under our thumbs. Until they voiced the voice we allowed them.

Obviously I am indulging in gross generalizations. But most of us are black and white thinkers. If we reject one end of the continuum, we fly to the opposite ignoring the gray areas in between. We don’t like baby steps; we take giant steps. We miss out on the nuances—and often what’s truly important. So those who were strictly and punitively disciplined, who grew feeling powerless and unimportant, but who wanted a different experience for their children, became powerless parents in the face of their children’s natural energies and desires. They either give in and give up or scream with resentment and anger.

A child’s job is to get what he wants when he wants it. That is normal development of the naturally egocentric child. The parents’ job is to accept and support this egocentricity while gently guiding it toward consideration of others. Previous generations hadn’t done a great job accepting egocentricity when children were beaten for not doing as they were told, and the new generation didn’t have the skills to gently guide children toward consideration of others. We thought that we had to allow our children all their desires, and we felt powerless in the face of their demands.

This is the limbo generation. Parents today are trying to figure it out and often err on the side of unintended indulgence. They give in to their children’s demands to avoid their anger and disappointment—feelings never allowed in their families of origin—attempt to boost their self-esteem by giving trophies for everything, and do for their children what their children are capable of doing for themselves. Hence, the age of entitlement.

Enter technology! “Faster than a speeding bullet” computers, cell phones, iPads, and video games gave today’s children and young adults the world in their pockets. What kid wouldn’t want that?

We appear to be raising a generation or two that has learned to expect privileges and preferential treatment, that is consumed by the world of technology, and that appears oblivious to the needs of others and their communities. They have learned that they don’t have to do what they don’t want to if they scream loud enough, and they have disdain for the older generation who don’t seem to know how to stand up for themselves.

Is this why today’s kids (again, gross generalization) seem to have no manners or consideration, think rules are for someone else, are stuck in egocentricity fighting with each other as toddlers do, are self-absorbed in their own worlds devised and designed by technology? And if so, what do we do about it? The pendulum will swing again. Where will it stop next?

Finding the balance, the middle ground, eludes us. Taking baby steps, trying it out as we go, will get us to that balance point better than over stepping the middle with our giant, monster steps.

Balance is the key. In the family, no ones needs or rights are any more or less important than anyone else’s. In other words, we don’t do things that aren’t considerate of the rights and needs of everyone. Balance is a hard point to find and an easy one to fall off of.