Q. I know that it’s normal for adolescents to reject their parents to some degree but my son (11) has been coming out with some very explicit insults about me. After school today, when I only said, “Hello”, he replied “You’re so annoying.” I said that I felt it was an unkind thing to say (he has said it a number of times lately) and he said, “Well it’s true, you do annoy me – a lot.” The previous time I said, “What is it about me that annoys you?” and prior to that had let it pass. I can brush it off and not take it personally a few times but when it’s repeated, it’s hard not to feel angry and hurt. Other times he wants to tell me things and is physically affectionate. I don’t expect a growing young person to hang out with Mum, but I give him the best of my care and kindness and all he feels is “annoyed”? It’s not that he says it that I have a problem with – it’s that he feels it. Please help with how to interpret and respond to this.

A. I had the worst year ever with my daughter when she was 11. She was my button-pusher and I learned so much from parenting her. At 11, her brother went away to school, and she hated being the only one, feeling like she was being watched all the time. She threw a lot of nasty barbs my way, which I didn’t always duck from (but should have). So, I know the hurt you are feeling. I wish I knew then what I know now.
At the times when You’re so annoying is tossed off to you without much emotion attached, try to respond with lightness. God, I know, right? It must be so infuriating to have such an annoying mother. Guess what I did today that was so annoying? This is only effective when your child is not angry and are not signaling something he needs from you right now. Only you can judge these times. If you are fairly sure you will get an eye-roll or a grunt rather than heightened anger at your sarcasm, go for it. This of course requires that you do not take it personally—which is why it can be effective. The more you react to the barbs, the more your son knows how effective they are. He then uses them as a power move. But when they bounce off, he will eventually use a different tactic.

Other times when you’re not sure where he’s coming from, use what you have in the past, “I’m wondering what seems annoying to you right now.”

But when those barbs come on strong—and only you will know when that is—do not simply take it and build resentment and anger. When they feel directed at you in anger, tell him—as neutrally as you can—that you do not like to be spoken to/insulted that way, and you will be in the other room when he is ready to tell you what he wants. Then go there. You can also add, “This attitude is not like you. Anytime you feel like talking about whatever is going on, I am here to listen.” 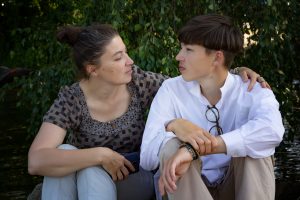 When he has thrown insults your way and soon after wants something from you (getting him something, taking him somewhere), you can say, “You know, I am still feeling bad about the way you spoke to me. It just doesn’t feel right to me to then do something for you. You can try asking me later.” Don’t ask for an apology, but a statement like this may very well bring one on. At which point you might say, “I appreciate that and what could you do next time that is less offensive to me?” This is what I consider natural consequences for being treated unkindly or disrespectfully by a child.

If you take away a privilege, ground him, or yell at him, you are using power over him (tit-for-tat), and it only fuels his anger toward you. You will start to hear a lot worse that ‘annoying’ in his barbs.

It’s all about your perspective. The more you think the words and/or your son are bad /disrespectful you will head toward yelling and threatening. If you understand that either this is his eleven-year-old way of telling you he is after as much independence as he can get or this is the only way he knows right now of telling you he’s angry about something, you will approach him from a more understanding and objective viewpoint—and the barbs won’t penetrate.

Try replacing the word “annoying” with “embarrassing” in your head. I imagine he is feeling his oats and wanting his independence. But in the meantime, mom’s presence may be embarrassing because you are a constant reminder of his dependence on you. You may never understand what it’s about, but knowing his words are not so much about you as they are about him can help you duck.

And of course, be sure and ask yourself, Have I said or done anything that has been unkind/disrespectful/insulting to him? If you’re not sure, ask him, pay attention and be impeccable with your word and deed before even a natural consequence. Also ask yourself if you have been nagging or hovering a bit more than usual. Are you getting nervous about the upcoming teen years and inadvertently pulling in the reins a bit? Perhaps he needs a bit more freedom in some area, so he can feel a little more responsible for himself.