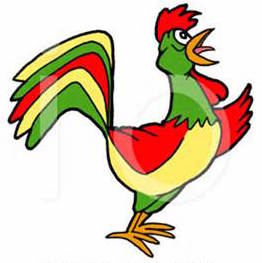 I saw an exhibit of Art Spiegelman’s many years of brilliant comic work at The Jewish Museum in NYC. One comic strip caught my attention as brilliant parenting advice. I share it here.

The comic was Spiegelman’s fairy tale of a Prince who told his father, the King that he thought he was a rooster. His father laughed it off but the Prince kept up his belief. His father, of course getting concerned for his son’s mental health, dismissed and belittled his son’s fantasy. The more the Prince seemed convinced, the more his father rebuked him and the more the prince regressed into his roosterdom until he eventually spent all his time naked under a table crowing.

The King called in all the help he could find in his kingdom and soon there were long lines at the castle door of people hoping for the King’s favor when they helped the Prince. But no one could cure the prince.

Finally an old man with a long beard but no credentials arrived claiming he could help. The King was at the end of his rope and hopelessly told the old man to go to his son.

A while later, the old man put his clothes on. The prince was aghast and asked what he was doing. The old man said that he was cold. “Don’t you think roosters get cold too?” The prince put his clothes on too. Soon the old man suggested they join the King for dinner. At the dinner table, the prince said to the old man, “Wait a minute. What are we doing here eating dinner?” The old man said to the Prince that just because they were roosters didn’t mean that they didn’t get hungry and need to eat. This made sense to the prince, and he contentedly finished his dinner.

In order for children to change their behavior, they first need to feel connected and understood—the foundation for self-confidence. When parents worry, dismiss their child’s desires as trite, criticize what the child is doing, and blame the child for doing it wrong, the child tends to dig in his heels. The parent worries more, pushes harder against the child’s resistance and the cycle spins.

No matter whether the child is hitting, not doing homework, or is out of control due to high energy, ADHD, or learning problems, to help the child, we must go to them, find out how they see things, trust them and give them our understanding. The more we criticize, blame and threaten, the more they turn away and find others who will understand them. Whether we agree or disagree, true empathy means seeing the world from another’s point of view. We don’t have to take our clothes off and join them, but we do need to understand them in a way that they feel understood and accepted. Then and only then, will they join us at the table.