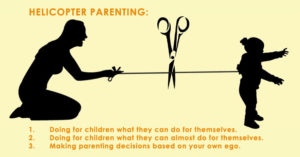 When boundaries are poor, a parent tends to bleed the line between her problems and her children’s, unable to tell the difference. If she has a problem—exhaustion, impatience, upset—she may make it her child’s problem by reacting punitively and lashing out with blame or criticism for her child’s annoying behavior. If it’s her child’s problem—anger over being told what to do, forgetting homework, getting a bad grade—she may make it her problem by taking responsibility for it, fixing it or trying to making it go away.

When boundaries are not strong and a parent hovers to closely, the child learns to depend on the parent to step in, even in ways he doesn’t like, and so can relinquish responsibility. As he grows, he may lash out hostilely at his parent for creating the dependency he has grown accustomed to.

The most important counter action to helicopter parenting is consciousness-raising on the part of the parent to see the patterns that get established. Becoming aware of tendencies from her own background that prompt her to hover, protect, and control can release the ties and initiate the letting go process.

If you’re not sure whether or not you helicopter parent, ask yourself:

Do I care more about what other people think of me than what my child needs?

Do I stay on his back because I’m afraid he is incapable and will fail if I let up?

Do I worry that she will fall apart if I am not with her?

If he gets a D in math, do you give yourself a D in parenting?

A yes answer to any of these indicates hovering.

• Don’t take your child’s behavior and words personally. It’s not about you.

• Never argue about your child in front of your child.

• Own your emotions and behavior, don’t ask your children to take responsibility. Start with I, not you. “I feel so angry when I see laundry on the floor,” rather than “You never listen. How many times have I told you to pick up your dirty clothes?”

• When your child is having a problem, ask questions instead of moving in for the fix:

What is it you want?

How can you get that?

What can you do about it to change it?

• Facilitate your child’s thought process by asking questions. Don’t do the thinking for her.

• Allow your children to make small decisions for themselves starting young—what they want to wear, whether they are cold or hot, full or hungry. Teach them to listen to themselves and their own bodies.

• Allow small risk-taking steps. It feels like a risk to let your child figure something out himself. The fear is he might fail. Tell yourself, He must make mistakes in order to learn.

The more we allow and support our children to be their own person, the easier it becomes to establish healthy boundaries. In the words of Kahlil Gibran:

You may house their bodies but not their souls,

For their souls dwell in the house of tomorrow, which you cannot visit, not even in your dreams.

For life goes not backward nor tarries with yesterday.