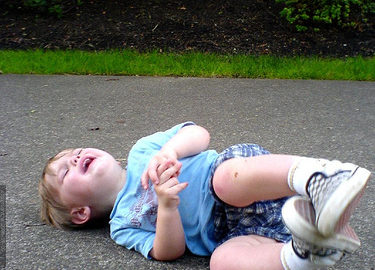 For the child, a temper tantrum feels like swirling in the middle of a tornado. It is frightening and there is no way of knowing when or if it will end.

A temper tantrum is not a parent’s favorite aspect of their child’s development. Tantrums are often accompanied by shrill screaming and physical kicking and hitting. And they result from “unreasonable” situations.

“I asked him to put his coat on, and he acted like I had pulled his arm off.”

“She wanted the blue plate that was in the dishwasher. I gave her another one and she threw it across the room.”

“All I did was tell him it was time for a bath. You’d think I told him I was leaving him for good.”

“What doesn’t he understand about ‘no’?”

Our adult reasoning brains have forgotten what it is like to be a child trapped in a body that often will not do your bidding. Impulses take over body parts, and words are emotional and dramatic and do not mean what they say. Our adult brains, together with our parenting culture, tell us that we have to stop this unpleasant and inappropriate behavior because if we don’t, it will never stop. So we isolate, punish, threaten, scream back at, shame or ignore—all of which tells the child she is being bad. Exactly the opposite direction we should take.