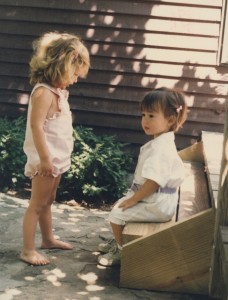 I often talk about the importance of listening to our children—really paying attention to what they are saying and doing—so that we learn how to “read between the lines” of their behavior and are better able to interpret what they say and do. When we understand our children, we take their words and behavior much less personally, have more empathy, and thus can respond rather than react.

I am reading T. Berry Brazelton’s memoir, “Learning to Listen”. If you don’t know who Brazelton is—you should. You probably have heard of Dr. Spock the pediatrician from the 50’s and 60’s who did a lot to change the way we look at parenting. Brazelton is the Spock of the 70’s thru now. He’s 95 and still going! He has written a ton of books and has the best knowledge and advice for parents of anyone I know. He has spent a lifetime learning about who babies are and what each one is telling his parents.

When he was in medical school in the early 1900’s, he was disillusioned and disheartened by the profession’s focus only on medicine and never on the patient. He since has worked hard to include child development in the training of young pediatricians. Brazelton did have one teacher, however, who changed his life.

This man, Dr. Robert Loeb had his students stand at the foot of the patient’s bed for fifteen minutes. They were to do nothing but observe and listen—no questions. At the end of that time, they were asked how old the patient was, what he did for a living, whether he was married or had children, what he was hospitalized for and whether he was recovering. Brazelton said, “The amazing thing was that if you had watched the patient and listened to him or her carefully, you could answer all of these questions….In my work as a clinician, I have used no other more useful technique.”

Now I don’t expect you to learn the same kind of information about your four year old or 10 year old for that matter. But this is to drive home the point that was as parents do way too much telling and way too little listening.

When I was in graduate school, I had an assignment that I completed by spending one day observing and recording my three year olds behavior. I still remember it like it was yesterday (it was actually 27 years ago!). I followed her around with my trusty pad and pencil, watched her, listened to her and let her lead the day. I never would have done this had it not been an assignment, but it was one of the best days I had with this strong-willed, high energy, demanding child of mine. She was happy, curious about everything, demanding nothing and a joy to be with.

No one would ever suggest doing nothing but this—talk about hovering! But what our children want most from us is to be heard and understood. This cannot be helped when you take the time to listen, when you trust that your child has a full life that can be explored and uncovered—and most importantly, that you can learn from. You will find that behavior becomes more cooperative and that your child is a joy to be around.

Obviously there is much more to parenting. But nothing is more important. Imagine if your parents had taken the time to do this with you once in awhile. How would you be different?

2 thoughts on “Are You Really Listening?”