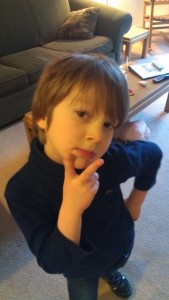 Don’t do that! You know you’re not supposed to….

What do I have to do to get you to listen to me?

Stop hitting your sister. Cut it out.

How many times do I have to tell you?!

Quiet down, you’re going to be the death of me!

(read all with tone of frustration and blame)

Be the child on the receiving end of these remarks. What happens to you when hear the accusations? Do you tense up, look away, run off, shut down? Where does your focus go? Depending on your temperament and how you have learned to avoid trouble, you choose a defense mechanism. So when that familiar tone emanates from your parent, you immediately hide behind your wall—your defense of choice. You do not put your focus on the effects of your behavior (a hurt sister, a tired mother), you put your focus on yourself and strategize how to keep from getting in trouble.

We teach our children early to defend themselves—unbeknownst to us—and then get furious when they do, claiming they never take responsibility for themselves.

Blame and the defense mechanisms provoked are obstacles to taking responsibility for one’s actions and for building an early and thus a pure, untainted conscience. A conscience is built upon experiencing the effects (the natural consequences) of one’s behavior—best experienced when nothing interferes.

When we blame our children, a natural and automatic reaction since we were brought up on it, we literally prevent them from taking responsibility for the situation at hand. A compliant child will likely apologize or make the amends a parent insists on, but the blame can lead to embedded shame that causes the child to believe he is not good. Forced apologies become just that—forced rather than rooted in a desire to make amends or do the right thing. Later they may lead to a rather snide, “Saawrry!” And then we have taught the child that “sorry” is all that’s required.

We want our children to learn right from wrong and to have intrinsic motivation to do what’s right rather than only what they are told to do. We believe that doling out blame, threats and punishment is the way for that to happen. That belief couldn’t be any more wrong. But we have it out of fear of the opposite: If we don’t blame they’ll never learn they have done anything wrong. That fear is based on distrust of the child’s innate abilities and desires to be successful—an essential belief for unconditional acceptance.

Deflecting blame by running away, fighting back, laughing, covering ears, hitting, lying, yelling “you’re not the boss of me”, “you’re stupid”, “you’re so mean”—are all defensive reactions to retaliate for the blame children feel. Those defense mechanisms obstruct their experience of natural consequences and the development of conscience.

Children start building their wall of defense at a surprisingly early age. A two or three year old who slams into his baby brother or “accidentally” kicks him in the head will look at you when the baby starts to cry rather than at the baby, when he is used to being called out for it. It’s all about him and what will happen to him.

Some children become overly concerned about how you feel, which translates to how are you going to treat me? “Are you happy, Mommy?” means the child has learned to take responsibility for his mother’s feelings. Her happiness means he can relax.

Resist the automatic tone of blame and replace it with doing nothing—yet. Deal with what has been harmed or who has been hurt and ignore the offender. When the offender learns she will not get “in trouble”, she will hang around. When you have calmed, ask her if she would like to get the icepack from the freezer, hand her the dust pan and broom or the cleaner and rag, remind her that you are talking to her and would like her to listen, bring the box for the toys or mess to go in, etc. all of which give her the opportunity to make amends. She may not go for it until she trusts she will not get blamed or punished. Then and only then, will she begin to effortlessly take responsibility, cooperate, and learn from the natural consequences of her behavior.

5 thoughts on “Building Defensive Behavior One Brick at a Time”