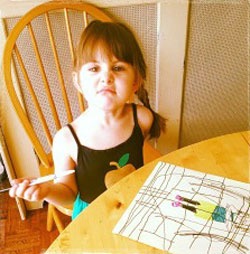 Stop putting so much attention on what you don’t want your children to do and put it on what you do want them to do. There are lots of kids—shall I say most?—who hear the word “don’t” and use it as a signal to go right ahead and do what it was they wanted in the first place.

What you put your focus on is where your energy goes and your child’s follows. What you focus on grows. It’s as simple as that. Whatever you want your child to get better at, that’s what needs your attention. For example, if you want your children’s respect, put your focus on respectful behavior. Show your child what respect looks like and try not to waver. When you yell and scream at them, that’s what they learn to do, too. When you take privileges away as a punishment, they will resist doing what you want as a way of punishing you. If we want them to take responsibility for their actions, we need to take responsibility for ours. Stop blaming your reactions on your child, or how exhausted you are. Your reactions are yours and you need to be accountable for them if you want your child to be accountable for hers.

We all want to bring out the best in our children. Yet we feel compelled to harp on their worst behavior with anger, blame, threats and criticism, thinking that will turn them around. When was the last time someone’s criticism of you motivated you to do what that person wanted? Do you really think that blame and judgment will encourage your child’s best to show up? When much of our energy focuses on the negative, what we get is negative. If we focus on the child as a problem, the child becomes a problem.

Imagine responding to an angry child who has just yelled, “No, I don’t want to” with, “Well you certainly know what you want and don’t want. Nobody is ever going to push you around. Your determination is admirable. Now how can we find a way to cooperate with each other?” Your child may actually end up feeling empowered by your words which will lead to cooperation a lot faster than criticism.

Our job as parents is to highlight (not praise) the qualities we see in our children that we want them to develop and to draw out attributes they may not know they possess. Never focus on the wrongdoing. Instead focus on your child’s competency.