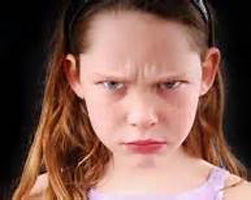 When your child misbehaves, do you see a defiant child or a child who is trying desperately to get it right? Your perception makes the difference.

The parents I hear from most have children like my daughter. These children won’t take no for an answer and will not be told what to do. A defiant child is how I saw my daughter. They will stand their ground for as long as it takes to get someone to understand that they are right—in other words, maddening. These are the children who push our buttons. They lead us into reactive territory saying and doing the things we swore we never would. They cause us to drop exhausted and frustrated into bed every night worrying about the hopelessness of their futures. This is because of the way we perceive them.

Traditional parenting determines that these children need to learn who is boss and to be wrestled into respectful attitudes and behavior. And traditionally, we attempt controlling this rude behavior with punishments and arbitrary consequences like taking away privileges and isolation in time out. However these methods cause a defiant child to dig her heels in deeper, fight harder, get louder and more dramatic with their behavior, and lead us right into daily power struggles. Believe me, I know this from personal experience.

Over my thirty years as a parenting specialist, I have come to believe that children, who are resistant and argumentative when told what to do and how to do it, have a depth of knowing what is right for them that feels assaulted when they think they are being told to do something in a way that does not feel right to them. It’s not that they don’t want to cooperate, it’s that they cannot do what they are asked if it does not make logical sense to them.

Okay, I know what you’re saying. “What has to make more logical sense about coming to dinner, doing homework, turning off the computer, etc. etc.” The thing is, their sense of logic and rightness is developmentally in line with their age. What is “right” for a five year old doesn’t always jive with his parent. His brother knocks into his lego creation, even accidentally, and he will scream at his brother for doing it wrong. If a friend or sibling won’t play the game the way he wants it played, they’re doing it wrong. But a parent or teacher adds insult to injury when it appears she is taking the side of the “wrongdoer”.

The way to gain a defiant child’s cooperation is to simply understand where he is coming from. You don’t have to agree with your child’s logic, you just have to understand it from his point of view and manage it with consideration. “You really know how you want that game played, and you get very frustrated when no one wants to play it that way. What do you think they need to hear from you in order to go along with your rules?” Your patience through the years of an immature sense of rightness will give way to a mature young adult whose integrity you admire.

You also may have children, or you certainly know of them, who are much more laid back, compliant, cooperative, and happy-go-lucky. (I have one of each.) Which one do you think is the easier to parent and teach? Which one makes you feel like a better parent or teacher?

I have come to the conclusion that the “won’t take no for an answer” kids are born with a steel rod of integrity. If something does not comply with what they think is right, they won’t buy it and can appear defiant. They cannot put aside what they believe to be right in order to “be nice” or get along or comply with someone else’s wishes. They have no trouble risking conflict for the sake of their integrity.

The more compliant children care more about social interaction, getting along, and everyone being happy. They are more sensitive to conflict and more likely to take another’s point of view. Harmony is their top value, while personal integrity is tops for stand-their-ground kids.

The Harmony kids are easy. But the Integrity kids are the ones we need to put our attention to, because we are pushing them further away with our resistance to their resistance. They will win every time, except the win is lost for them when they feel unaccepted and misunderstood by the most important people in their lives.

I believe the most important quality for success in life is strong self-confidence—something I had to gain as an adult. No matter what the neurological, physical, or mental impairments that may separate a child from the “norm”, self-confidence will feed them and help them reach their potential. But when that confidence is drummed out of you by unintentionally damaging messages that the more traditional parenting methods embody and are replaced with fear and insecurity, that sense of personal integrity and rightness can take some seriously damaging detours.

When the perception is, This kid needs to learn who’s boss. She needs to listen and do what she’s told, the Integrity child will scream, No, I don’t. You’re not the boss of me. And guess what? She’s right. She is trying to get you to understand that there is nothing wrong with her. But she does need to feel like her own boss.

As long as you can help your defiant child feel strong and take into consideration that she believes she knows what’s best for her (even when she doesn’t), she will incorporate other’s senses of rightness as she grows. And you will likely learn that she really does know what’s best for her. When this integrity is understood and accepted, the edges will soften, intolerance will grow into compassion, and this child will develop in ways that you cannot possibly imagine.

7 thoughts on “Defiant Child or Full of Integrity?”