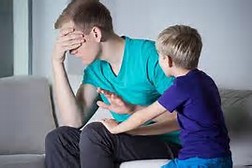 What’s the difference between letting go and giving in?

Letting go after engaging in power struggle after power struggle feels like giving in. Which is why I kept up the power struggles with my daughter for so long. I knew it wasn’t right to give in. I couldn’t let this little brat have her way. She had to learn. After all I was her mother.

My daughter was a won’t take no for an answer/won’t be told what to do child. It’s hard to accept a child like this until you understand that this is temperament. It’s an inborn personality trait, not a manipulative defiant behavior to be eradicated. But that’s what I tried to do for a long time, so I couldn’t give in, I couldn’t let her get away with it.

After all was said and done, I came to understand that letting go means that you are willing to be open minded enough to accept other points of view. You may get stuck on yours for awhile, but when you’re willing to see another viewpoint or understand new information, that information can be just enough to allow you to rethink your stance, change your mind, and back down from what no longer seems important—to let go of your position. That’s called communicating.

But if you “stand on principle” because you’re stuck in the I’m the boss parenting mode, you cannot allow another point of view. You believe that yours must win, must be right. That’s called a power struggle. And you fight to win.

If you have a rule that must be followed—no playing in the road, no ice cream before dinner, homework must be done before video games, bedtime comes whether you like it or not—that your child argues with incessantly and you are finally worn down by the argument and the meltdowns and drop the rule (“Oh, alright, go ahead.”), then you are giving in. That’s called giving up your power and your authority.

“Mom, I have to have that video game. All the kids are playing it. I’m so left out. You don’t understand.” Strong arguments from your child, the budding lawyer who will say or do anything to get what he wants, are hard to respond to. You want to do the right thing, you don’t know what that is, and you flip-flop or come up with an instant response.

The I’m the boss parent might immediately say “No” and “I don’t want to hear anymore about it.” Let’s say the child’s argument goes on and on. “You never let me get anything I want. You are so mean. Why can’t I have the game….?” You’ve had a long day, you are worn thin, you have to get dinner on the table, the baby is crying, etc. etc. so you say, “Alright, I’ll get you the game. Are you happy now? Will you leave me alone please before I change my mind?” You have given in and set the stage for more and longer arguments in the future because you have taught your child that enough wearing down will end in victory.

Same argument. You still don’t know what to do. So you say, “No new video games.”

“But Mom, Brian has it and it’s so fun, etc. etc.” The argument is strong and you decide to communicate, “Sounds like that game is really important. Tell me about the game and why you want it so badly.” This generates more communication. Then you come in with your concerns. “You know how I feel about violence and about how characters are treated in video games, so you probably know what I would think about this game. What do you think I would say?”

“Oh but Mom, there really isn’t any. It’s about… I think you’d be okay with it.” You listen, you absorb, and let go. Your decision might still be no but it will be an informed no. Your child will be disappointed but will know that at least he was heard. Or you might say, “Well I’m not going to buy it for you, but how could you find a way to get it.” And with your permission, your child uses his allowance or comes up with jobs around the house to earn it, learning responsibility as well as resourcefulness.

With my daughter, my letting go involved changing my assumptions about her motives. When I thought she was out to get me and trying to manipulate me, I had to hold my ground and try to control her. When I listened and learned, I finally understood that she wasn’t trying to make me mad, she was in fact miserable. She was having a hard time instead of giving me a hard time. When I could take that in and trust her, I could let go of control. I could listen to her and empathize. I said things that made her feel heard and she relaxed. I no longer had to force her to do anything. And in the letting go, she came to me.