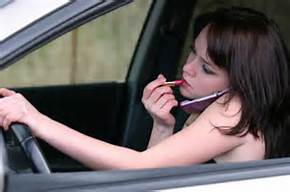 o you have a young driver in your family? Or a soon-to-be one?

We all worry about our teens (or soon to be teens even if they’re now only two) as they are about to take the wheels of our cars and get on the road. Distractions are everywhere. Does your teen driver see them? Simply having a cell phone or a friend in the car can be distracting for a teen, who is new to driving and has a yet undeveloped pre-frontal cortex, which makes good snap decisions difficult.

A concerned mom of a teenager and a guest blogger wrote to me with her desire to spread the word about a video game about distracted driving. She found it to be very helpful for her teen driver. She wrote me the following story. Please check out the video game she found so helpful.

“The other morning when I drove my youngest daughter to school, the traffic was slow and a little nerve wracking due to the rainy weather. My daughter was sitting in the back seat watching a video on her tablet, and I kept hearing the constant ding of an alert. As motorists around me darted in and out of lanes, I tried to keep a safe distance between the car in front of me. My windshield wipers were having a hard time keeping up with the rain and the sounds (ding! ding!) from the backseat started to make me feel edgy. I took a deep breath, squinted through the rain, and tried to make out the distance between me and the other cars.

“Turn that off!” I finally snapped at my oblivious daughter. “I mean, please, turn the sound down or use headphones.” I caught her glare in the rear view mirror and watched her put in her ear buds. Although I felt guilty for being a snarly mom so early in the morning, I instantly felt less stress and I was able to focus on driving. When we arrived at my daughter’s school I asked her if she knew why I had been “snippy”. “Yeah, I guess,” she said, “you can’t handle noises when you drive. It wasn’t that bad, Mom.” She hopped out of the car and shuffled into the school.

“Every morning, as I head to work, I notice a handful of drivers (young and old) being completely consumed by something other than the act of driving. Usually I spy someone using a cellphone or trying to sneak a text between stop and go traffic. Other times I notice parents reaching behind the seat for a lost pacifier or toy thrown from the back seat. One morning I watched a young man eat a breakfast sandwich and bounce a basketball against his dashboard while steering with his knees. Impressive, really, but I gave him a stern “Mom” look.

“I advocate for safe streets and despise distractions because I’m a parent of a daughter who can drive with a permit, I’ve had way too many close calls myself, and I’ve witnessed car accidents that could have been easily prevented. As a parent of an almost-ready-to-drive-alone daughter, it’s terrifying to think of her on the streets alone. My husband and I take turns driving with her and while my husband is more into teaching the mechanics of driving, I use our rides together as “teachable moments”.

“One afternoon before my oldest daughter and I had a driving date, I came across a reckless driving game called Reckless Racer. The object is to drive along a metropolis highway, lined with beautiful cherry blossom trees and billboards, and dodge objects in the road such as donuts, smartphones, and other vehicles. As I sat in front of the computer waiting for my daughter to get ready for driving (who needs to primp for driving?), I decided to give the game a try. Less than I minute in, I failed because I was trying to read the billboards. My second try lasted a little longer, my third even longer, but I kept crashing into things and got frustrated (I am not a distracted driver). I was still playing when my daughter pulled me away from the computer. “Mom, you can try again later.” I urged her to try just once before we left and she passed right away. I smiled and handed her the keys.

“As we drove around town, we passed a car full of teenage girls. The driver was brushing her hair, the passengers in the back were bouncing around, singing loudly, and dancing. The front passenger was holding a cellphone up to the driver’s ear. I was about to say something about distracted driving when my daughter piped in, “You know, I learned at school that like 12% of crashes are because of a cellphone and 15% of crashes are because of other passengers. Even grooming is a cause for an accident. And that’s why I get ready before we go driving, Mom.”

“My daughter rolled her eyes and smiled at me. Between our guidance and what she learned at school, my daughter is a much safe and savvy driver than I gave her credit for. As I reached for the radio dial and started to say something to my daughter, she interrupted and said, “Mom, not now. I’m trying to concentrate, okay?”

Click on the link for the reckless driving game and see how you do. Then see how your soon-to-be-driver does.