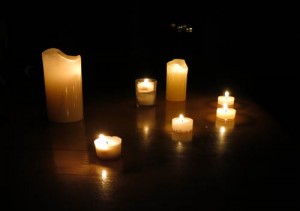 It is auspicious that our world has lost one of its most peaceful warriors at the marking of the one-year anniversary of one of its most violent acts. As we mourn the loss of one who brought peace and justice to the millions of oppressed in his country and set a standard for the world, we mourn the loss of 20 small school children and 6 of their caregivers needlessly gunned down at their school.

Are we setting more standards in the US or are we waking up?

Since the shootings at Sandy Hook Elementary, schools across the country hold practice lock-down sessions. The idea is that schools are better prepared to defend themselves against more shooting rampages. At the same time we are instilling fear into millions of children who should never have to question their safety at school. Many children prone to anxiety and concern may now spend their days listening for gunshots, anticipating strangers coming into their classrooms and fearing that no matter what desk they duck under or closet they are ushered into, they will not be safe. Is this how we must raise our children? Are we creating a safer environment or merely expecting the worst? More must be done.

What would Mandela do?

A prince of peace we have not seen the likes of since Ghandi and Martin Luther King and may not again for many years to come, Nelson Mandela began as a non-violent protester and later led a sabotage campaign to overthrow the apartheid government in South Africa. In 1962 he was arrested for conspiracy, deemed a traitor and a terrorist, and was sentenced to life imprisonment. For most, imprisonment hardens. For Mandela, it softened. He was allowed to send and receive one letter only every six months during his 27 years behind bars. Yet never for a moment did his life sentence suppress his convictions and determination. His prison cell became his sanctuary to deepen his dedication to the cause of peace and justice for black and white both.

Mandela’s extreme acts of courage to fight for equal rights, to raise the South African blacks out of apartheid to humanity, to become a pillar of strength and peace across the world, leave us with a high ideal—a mark of greatness not many can achieve. How many of us would remain committed to our convictions when faced with death?

What would Mandela say to us on the anniversary of Sandy Hook? Where do we go from here? Do we move forward by submitting to the inevitable force of politics? Or do we have the strength of our convictions to right our world so that our children are not victims of madness.

Whether or not we believe in the right to bear arms, we must believe that our children—or any innocents for that matter—should never again become targets for those arms. Can we not learn from the principles of peace and non-violence instead of meet a potential killer with more guns?

It has been estimated by the CDC that almost 33,ooo people in the US have died from gunfire since the Newtown shootings. And Mother Jones has reported that at least 194 children under 12 have died of gunshots in the last year. If loosing 2o children in one go is not enough to change our gun laws, what are we waiting for? Clearly guns kill. Adam Lanza could not have done what he did had he not had the weapons and ammunition he did.

I call for each one of us to stop long enough to pay attention to our best inside and to allow that best to be inspired and prodded by one who sets an ideal for each of us.

I heard that whenever Mandela met a child on the street, he would ask the child what she had for breakfast. It’s the little things we do that touch people and make them feel important.

The resident’s of Newtown have asked to be left alone on this anniversary of their loss. They want to spend it privately and are encouraging others to honor this anniversary by performing an act of kindness. What small kindness will you dedicate to the memories of Nelson Mandela and the Sandy Hook children?

1 thought on “In the Wake of Newtown and Nelson Mandela: What can we learn?”