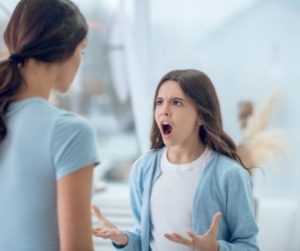 Q. I know you don’t believe in consequences, but is there ever a circumstance where a consequence is effective even when knowing the root cause of the behavior? Example: My 10-year-old son expressed this morning that he wished he didn’t have to go to school. He was moody and angry. I did some digging and turns out he hates music and it’s his first class of the day. I get it. I said missing school isn’t an option and asked if he could think of anything to make the day bearable. He was super angry and wasn’t open to hearing me and started to call me vulgar names/swears. I told him that calling me names is unacceptable—something I’ve told him many times. He stormed outside to ride his scooter for a bit, and I was left wondering if he should lose YouTube after school. Will it make him remember or think twice when he is in the red zone swearing at me? Is it just a thing parents do to feel in control when the situation feels so out of control? Can I do both? Does it make sense to say, “in our home when you call me vulgar names you lose privileges”?

On the drive to school, he was able to calm down and we listened to some music he liked. I said, “It’s hurtful to be called names and I bet you feel bad about it too. I packed an extra treat in your lunch to brighten your day.” I told him about my days in the office where I had to sit through boring meetings and got through them by daydreaming or rewarding myself later. It’s natural to feel bored sometimes.

Does he even have the skills not to lash out when he is angry and how do I teach him those skills? Is it all parental modelling? I asked that he try not to swear and name call when he is feeling angry (I ask him this on a regular basis). He said “ya ok.”

Is that enough? Would you consider that dealt with? Would taking YouTube away after school just make him angry and cause a repeat of this morning? I am aware that the lagging skill is him using horrid language when angry and I am uncertain about how to deal with it.

A. Your response in the car was well done and most certainly enough. Your son was able to hear you because there was no blame, which would have caused him to tune you out and learn nothing but how annoying you are! The way you handled it was understanding of his frustration, which encouraged him to listen and then tell him what was not okay with you. Your response was similar in the house, but as you say, he was too angry to be able to hear you. It’s hard, but so much more can be accomplished when we have the patience to allow our children to get through their emotions so they can hear.

Why do we think that angry children should be able to get control of themselves, stay calm and say what it is they mean? Most adults cannot. When you yell and threaten to take something away, perhaps screaming and losing your control all-together, is that not impulsivity provoked by anger? When that happens to us, why do we think it shouldn’t happen to children? 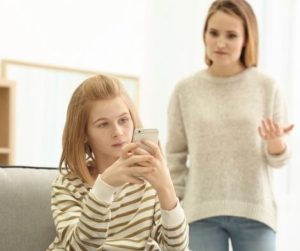 Of course, you want him to stop swearing at you—at any time. It may stem from a lack of trust in your response when he says what he does. If he fears you will take his favorite thing away (a power trip that parents use to gain control), he will not be inclined to be respectful of you. Taking his expected YouTube time away would be disrespectful of him. (Whether or not he has YouTube privileges is a different matter).

What works is standing firm in your own integrity. “I do not want to be spoken to like that. Let’s take a breather and come back to this in a couple minutes.” He was able to take his own on his scooter. He’s angry. Words we don’t mean come out when we’re angry. The best way for him to learn not to use hurtful words is to hold a clear boundary, have self-respect, and come at it from what is okay and not okay for you—not to use punishment.

If your husband called you a name, would you take his phone away? Of course not. You would know there is a problem in the relationship. Your husband wouldn’t lose privileges, so you can’t really say in this house calling names means losing privileges. What it does mean is there is something emotional going on underneath and when triggered, hurtful name calling results. Finding out what’s underneath is your goal.

So far, I’m not sure you do know the root cause. Not wanting to go to school and perhaps fearing you won’t understand sounds like a trigger if, as you say, the name calling has happened before. The swearing will continue until you get to it. Taking privileges away causes more and more problems in your relationship, which gets harder and harder to repair as children get older.

When Do I Draw the Line?