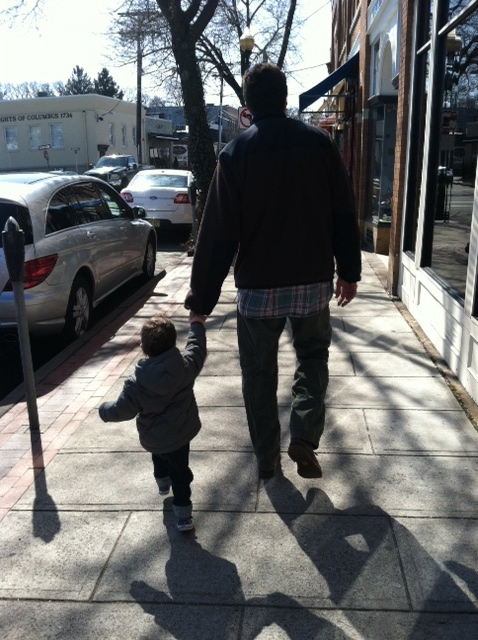 My husband and I were taking a walk with our 21 month old grandson. For a short distance we needed to walk in the road. I said,

At first he did and then he had a different idea and pulled his hand away. I said,

“Sam you have to hold my hand.”

He did not want to comply. So I picked him up as he was working hard to wriggle away from me and said,

“Sam you have to hold a hand in the road. You can hold Poppy’s hand or my hand, which do you choose?”

He stopped wriggling. I could see him thinking. He then reached for Poppy and happily took his hand. Then he reached up for mine. For the rest of our walk he wanted to hold both our hands.

This is problem solving. Quite simple when you understand the principle. But impossible when you are stuck in the old reward and punishment mindset.

It worked because Sam wasn’t being forced to do something he didn’t want to do—and I got what I wanted. In other words, it worked for both of us—the #1 rule of problem solving.

When this kind of communication begins early in a child’s life, problem solving becomes second nature. You don’t even realize you’re doing it. When children trust that what they care about is important to you, even when you highly disagree, they are willing to listen to rules because they know nothing punitive or threatening is involved, and they will come out okay. No need to worry about getting in trouble, which keeps the child’s focus entirely on herself—the opposite of what you are trying to teach.

As children get older, problem solving gets more complex. If you have been parenting in the punitive mindset, believing that your child is being defiant and bad, switching to problem solving first requires a shift in your perception and then building trust so your child knows you are willing to see things differently. If she expects you will yell, take away her iPod, or disrespect her with degrading words, she will get quite cleaver at becoming parent deaf and defy everything in anticipation of attack.

In my scenario with Sam, my old mindset tells me,

Sam’s being defiant and disobedient. He’s not listening.

This of course provokes my anger, which leads to my reactivity—control, domination—grabbing his hand with force and using a hard tone,

“You will hold my hand or we’re going back in the house! Don’t you even try to get away. It’s not safe. You have to do what I tell you.”

This works against his agenda and will most likely lead to a power struggle in which I have to fight to win (meaning he has to lose). He will begin to distrust me. Of course it’s not safe. Of course he has to hold my hand. But I can give him a way to comply with my wish without forcing his will and making him think he’s bad.

I need to understand that he’s not doing what he is doing on purpose to defy me. He’s doing what he wants. When I take it personally, I get my buttons pushed, and I react.

Of course he doesn’t want to do what I’m telling him. He has another agenda.

When I think that way, I remain calm because he is behaving the way I expect him to. Therefore I can stay firm with my rule, mean what I say, yet do so without anger and blame and most likely gain a cooperative child.