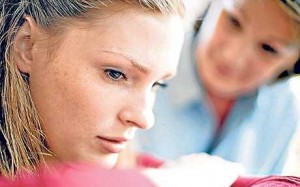 As a follow-up to my recent blog about the amazing personal journey of Gayle Kirschenbaum and her mother that will be available to all of us in her upcoming movie, “Look at Us Now, Mother”, I wanted to post this personal question I got from a parent a long time ago.

Q. I am currently reading your book, “When Your Kids Push Your Buttons” and have a question on something I read. The section called Parent-Blame didn’t sink in with me and I’m hoping you can clarify. It says, “Your parents did the best they could given the knowledge and circumstances they had at the time.” It sounds like we should hold blameless those parents who just don’t do right by their children. On a more personal level, what if my mother had thought to herself as she was parenting that there must be a better way to do this, but, dammit, I have 7 children and it’s just too hard, or, this is the way my mother raised me, so therefore, this is how I am going to raise my daughter. Does that mean she’s still blameless for everything she chose to do or not do? It’s like saying we have to forgive all the previous generations for how they parented, but our generation is to be more accountable – I am accountable. But shouldn’t my mother and her mother have taken responsibility for themselves? I didn’t have an opportunity to share my concerns with my mother as she passed away 8 years ago and had a debilitating mental illness since I was 16. It’s a fact that she did not do right by me and treated me differently than my siblings. But even my forgiving her doesn’t release her from the responsibility she had or hold her blameless.

The other line in this section I didn’t quite get was, “Their intentions were most likely different from the messages you received.” But, this isn’t necessarily true in every case, correct? How would I know for sure? I can try to assume that my mother loved me as much as my siblings, but when she said herself she wanted only boys (perhaps based on her own experience and the way she was treated as the youngest daughter w/an older sister and brother), it is hard not to think the messages I received were intentional on her part. What matters most to me now is to not repeat the mistakes my mother made and to acknowledge that her mistakes were because of her issues (i.e. her responsibility or her fault), and not because of me, or anything I said or did.

A. I don’t believe very many parents choose not to do right by their children. Like your mother, they parent the best they can “given the knowledge and circumstances they have at the time.” They may be aware that they are not doing what they want, but they usually don’t know what else to do. Still true of most parents I see. We often feel helpless at the power and control of our past patterns. Your mother learned from her past. I doubt if she and her mother had the opportunity to take classes or have therapy to change deeply set patterns of behavior. Do you blame any of your friends for saying and doing to their children what they wish they hadn’t? Of course not. Are they responsible for what they do? Absolutely. I see blame and responsibility as very different things. Absolutely your mother was responsible, but if she didn’t have the resources to help her understand a better way the way you do, blame will not help. Blaming her keeps you stuck and releases you of taking responsibility for yourself. “…given the knowledge and circumstances they had at the time” does not release her of responsibility but does offer information about the context in which her intentions were made. Her mental illness was one of the circumstances within which she parented you—terribly unfortunate for you. It caused you pain and suffering that can last a lifetime. She was responsible for the choices she made but within a context of very little control over what she was capable of. When she said she wanted only boys, you heard, “You’re no good.” As you said, her intention might have been based on her experience of being a girl and not wanting her children to experience the pain that she did. She likely did not intend for you to hear that you were no good. She was responsible for saying those words to you, but it’s likely, especially given her mental illness, that she didn’t understand that it would have any effect on you. This doesn’t mean you need to feel wonderful about the way you were parented. But it doesn’t help you to say she should have known better and stay stuck in blame. You may very likely need to go through blaming her to deal with the anger you feel—it’s hard to get to the anger without blame. Your perspective of how you were raised, the damage done, the pain felt, is very real and is your right. But inevitably, when we do the work, go through that blame to get the anger out, we come to the other side where there is no more blame, and not necessarily forgiveness—but acceptance.

Her Response: You’ve given me much to consider and mull over; and I can already sense a few light bulbs going off (as Oprah would say, some “Aha” moments). I think you captured my mother’s predicament so precisely. I have the sense she might even be speaking to me. I reread what I wrote and I can definitely sense some residual anger. It never occurred to me that I could come out on the other side without blame. The most I hoped for was for there to be no more anger. Your perspective has given me hope, and you have helped more than I can articulate now. Please feel free to reprint any of this. If it helps someone else, that would be great.