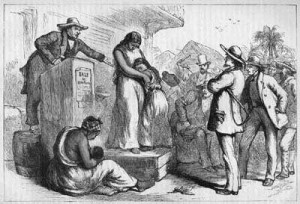 When I heard about Adrian Peterson’s switch-beating of his 4 yr. old son with all the gruesome details, I was filled with disgust. Then he claimed that he was brought up that way, and he did it to teach his son right from wrong. Ignorant of child development and playing out his own treatment, I thought—not to mention the power and privilege of his position with the NFL that apparently gave him the right. Then I heard Michael Eric Dyson on television and read his NY Times Op-Ed piece on the subject.

Dyson, the author of sixteen books on subjects such as Martin Luther King Jr., Bill Cosby, and soon Obama, is a Georgetown sociology professor and outspoken and highly influential African American. Hearing his perspective opened my eyes.

According to Dyson, black Americans have a distinct history with severe corporal punishment dating back to slavery. “Black parents beat their children to keep them from misbehaving in the eyes of whites who had the power to send black youth to their deaths for the slightest offense”, Dyson says. “Today, many black parents fear that a loose tongue or flash of temper could get their child killed by a trigger-happy cop. They would rather beat their offspring than bury them.” These fears are not unfounded.

Before we dole out judgment and blame, we must acknowledge where the abusive behavior is rooted. Punishing the immoral behavior does not end the cycle. I for one think Peterson, Rice and all the rest should never be allowed to be in the public eye again where they are models for our young boys. But I would like to see Peterson stand up as a model for ending his cycle of abuse, which he can only do with help.

Dyson sites the origin of the word punishment “…from the Greek word “poine” and its Latin derivative “poena,” which mean revenge.” It is human nature to retaliate and seek revenge when we are hurt or attacked. But it is the adult’s responsibility to understand child behavior so as not to feel attacked by normally impulsive, immature, egocentric behavior. It is not only the black community (an astonishing 70% of Americans believe in corporal punishment) that misunderstands how to eliminate inappropriate behavior and teach children to control their impulses.

I could not agree with Dyson more than when he says, “The purpose of punishment is to coerce compliance and secure control, and failing that, to inflict pain as a form of revenge….” When will we grow as a society and understand the roots of our pain so we can heal and stop passing on the behaviors we were brought up with that planted that pain; the behaviors that instill fear; the behaviors that beget the same behaviors?

Does Adrian Peterson consciously believe that his switch will prevent his son being killed by a cop’s gun, or is he unconsciously passing on the beatings his mother gave him (her admission) as the result of her fear of what would happen without her beatings? As I begin to understand the roots of these beatings in slavery, compassion replaces judgment. It is only through compassion that we as a culture can see the need for help and provide it.
The argument that “I turned out okay” does not hold water. When we automatically and thoughtlessly re-enact treatment used on us out of fear, we are not okay. Nor is the next generation that suffers that abuse. Adrian Peterson and other celebrities recently in the spotlight may serve as our “whipping boys”. They may be punished severely rather than benched for a couple of games. But is this enough?

Compassion for the history of the black family with its fears for a child’s life at the hands of the white man is poignant, terribly sad, shameful, and important for our understanding, yet it still does not condone violent treatment. Education is imperative. I would much rather see Peterson required to take parenting classes and become a spokesperson for breaking the cycle. What good will suspending him from football do his son?

The question to all of us is, what fears at our backs are informing our parenting? Are we parenting effectively for each individual child or are we merely keeping the wolf from the door?

1 thought on “Child Abuse, the NFL, and the History of Slavery”