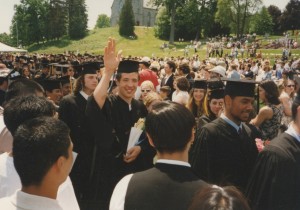 A question and answer in my last newsletter resulted in the following responses from both parents with such an inspiring story, I had to share it. I think everyone, no matter how old your children are, can gain from this. Letting go can be the hardest job in parenting. I thank these parents for their responses to me and permission to share this with all of you.

Q. My 18yo high schooler has been getting $10 a week since he was very little for spending money. I used to give his brother (12) and sister (9) the same, but now we are not doing well financially and they relinquished theirs last year. The 18yo has refused to give up his weekly $10. After he got his license, using our car (which we insure and pay gas for), he got a bank card and an account, and told me to direct deposit the $10. He started buying Starbucks coffees and snacks and told his dad that he had to pay for it. Which his dad did. His dad and I agreed to give him $5 more per week with the understanding he would by his snacks. Recently he overdrew his bank account and then came “crying” to us to help. I said I would advance his allowance once, and that I would not rescue him again. Now he has overdrawn again. I feel financially strapped not to mention he is never grateful but demands the money as his “right.” Giving him the money, when his sibs get nothing, and rescuing him makes me feel angry with him 24/7. He never helps around the house – says “maybe later” which never comes, says it’s my “job” to make him meals and is generally nasty to all of us. I feel guilty about not knowing what is “reasonable” to give him. Should we give him any money at all? Is that our “responsibility”? If so, how much? We already pay for his food, including special requests, gas, car (he uses our newest and safest car whenever he likes), car insurance, his clothes, heat bill, electric bill, phone bill, housing. Help!! This is just going to get worse this summer (he has no plans at all) and next year in college.

A. It sounds your 18 yr. old has been given the power to call the shots for quite some time. Isn’t it your choice to stop the direct deposits as opposed to him refusing to give them up? For some reason—I’m sure there are many—you are afraid to make him mad even when you don’t have the money to give. He has taken but hasn’t learned to be considerate of others, so the balance has been off for a long time. He has come to depend on you to solve his problems and support his habit of getting what he wants. Unfortunately when this happens, we cannot blame our child for behaving in ways we have actually taught. His dependency served him for awhile but now he resents you for that dependency. It will be very important for you to support his attempts to find a way to make his own money. What it requires is for you to be strong in your conviction. I think allowances are very important for kids to learn the value money. Your younger two should be getting one but your 18 yr. old should being earning his own. I know the economy today makes it very difficult to find jobs, but if he needs money, he can find a way. I suggest that you and his father establish a deadline for ending his allowance and helping him transition to earning his own. He will hate it and hate you initially. That is the risk you need to take. It will serve him for the future. Make it clear that you will continue the $15 until that deadline. Colleges offer many opportunities to make money. I imagine you feel guilty when you don’t give him what he wants. That guilt is yours to examine, not to enable your son. Think clearly what you will and won’t do for him and then be consistent.

From Mom:
It’s now over two years since that letter. Thank goodness for your help. When I wrote this, I simply could not see it logically and rationally. Your response helped catalyze me to be able to do that. Our son is now 20yo and a sophomore in college. We did end his allowance back then just as you said (over time, with warning). I also told him we were not supporting him financially anymore very soon, and we made a date for that. It took us the rest of the school year to slowly withdraw everything. He had a lot of tantrums. I didn’t get caught up, but just kept reminding him that he better be looking for a summer job.

As a result, he got a summer job and did amazingly well at it and earned a lot of money, and he went off to college with his own money knowing that we wouldn’t be paying him any extra the whole year. He got jobs at college and budgeted and even had enough money to finance a trip out west in the spring! WOW!!!!

One of the things you had said was that what we had been doing was a disservice to him in terms of being independent and able and confident. After the summer, he told me that the last six months of high school had been the “worst of his life” because he was so scared about making it on his own, but that after that summer of working, he felt totally independent and free in the world and completely confident that he could do anything and go anywhere on his own.

By the time he went off to college, because things were going so well, my husband and I were able to begin to do fun things for him as gifts and surprises instead of out of obligation.

I can’t say we are perfect, and it’s certainly a process, but I have found that listening to the resentful, hurt voice inside me tells me that there is an issue that I must, and can, address. It’s always painful, but I believe now that I absolutely must honor that hurt feeling and act on it. That is my reliable signal that something is wrong and needs to change. Then I take some time to figure out what set of circumstances or arrangements would make that feeling go away and pursue those new arrangements with conviction and purpose!

My two younger kids, now 10 and 14, certainly have benefitted from my work with the oldest. They are doing great!! I am doing great!! As the 20yo often says, “Mom, I was the experiment and the training ground.”

The interesting thing is noticing how we as parents continue to struggle with how we look at the oldest one, even though we easily and without struggle look at the two younger ones totally differently. It’s like we snap into different parents when we are standing in front of different children. Whatever pattern we did with that particular child when they were five is what we keep inadvertently snapping back to. Interesting. I remember there was a nine year gap between my sister and me, and it was like we had totally different sets of parents. And they still treat us differently – the pattern and relationship they established when we were each five is the way they still treat us.

From Dad:
I wanted to chime in, after my wife sent the conversation to me. Everything she described is completely accurate. The difficult boundaries she made were absolutely terrifying to me – I was terrified that our teenager would stop loving us, or that he would distance himself, or that he would commit suicide – but in EVERY SINGLE CASE, while it at first was completely terrifying and often dramatic… he bounced back in close. And matured. This process, of disengaging with the behaviors that were obviously not helpful to him (though I thought they were critical to him loving me) were THE HARDEST so far as a parent. Your help was priceless and completely appropriate. Thank you.

1 thought on “The Gift of Letting Go”