When kids are viewed as bad, they learn they are bad, and so they behave badly. Most parents don’t believe this. Here it is from the horses mouth.

I wanted to share with all of you this testament to connection, to listening and trusting your child and how he operates, instead of using tactics to try to get him to be who you want and losing connection in the process. This was said so beautifully and succinctly said from a parent who has been there, put connection to work and reaped the benefits. 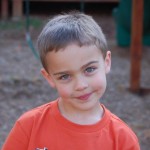 “My son was 5 years old and starting kindergarten. I was excited for the first parent teacher meeting to hear how he had been adjusting to school. The meeting did not go very well. In short, I left disheartened and believing I had a difficult and disruptive child, an awful feeling for a parent.

It went downhill from there. He was sent to the principal’s office multiple times a week and eventually kicked off the bus as well. I was beside myself. I felt hopeless, frustrated and honestly sad. He was my first and only child, and I was completely messing this parenting thing up. Not only that I had this child that I loved dearly that apparently no one else could tolerate to be around. I listened to other’s opinions and advice on what I should do and why they felt he was the way he was, but nothing felt right. I didn’t completely understand what was going on with him but I knew he didn’t want to be the problem, it was just the way it seemed to be.

Then the day came when he looked at me and said, “I do that because I’m a bad kid, that’s what bad kids do.” He bought into it, he heard and felt it enough that at 5 years old he labeled himself as “bad”. NOPE not happening.

That’s when I found the River Center and Bonnie Harris. I joined her Tuesday morning Connective Parenting group and it was like someone had finally turned the light on in a very dark room. I understood now. He wasn’t the problem, he was having a problem and all I had to do was listen and connect with him. For example; Adults would say to me “He doesn’t stop moving when I talk to him, he needs to stand still and make eye contact so I know he heard me.” As a result when he did what they wanted and stood still and “listened” immediately after he would walk away and do his own thing. Therefore getting in trouble and being a “bad kid”. Through Connective Parenting I realized in order for him to listen and actually hear what people are saying he not only needed to but HAD to move. Was it distracting? Yes. But if he was allowed to move while given instruction he was capable of doing exactly what was asked of him, and not be a bad kid.

I had to advocate for him all through elementary school. Every year I would volunteer in the classroom and make sure I could explain him to his teachers so they could better understand him. He and I had struggles and obstacles along the way, it wasn’t always a smooth or easy road, it’s work.

He’s 13 now and started 8th grade. He’s still a great kid, and I don’t need to explain him to his teachers, he’s fine. He and I talk and communicate with each other, we are very connected. In fact, I had him read this after I wrote it. When he was done he gave me a hug. One thing he has said and carried with him is that he knew I believed in him. I was able to do that with Connective Parenting and my support group.

There’s this quote by an unknown author I would say to myself on the tough days. “To the world you may be one person, but to one person you may be the world”. To our children, especially when they are young, we are their world and if your world believes in you, you can believe in yourself and the skies the limit.”

It’s hard to truly understand that we are the ones who need to do the work. Our kids are fine just the way they are, until they have to shift and change according to what we demand of them. Tyler could handle the difficulties of school expectations and come out on top because he had the connection at home—not only with someone who believed in him but also someone who truly listened to him.

5 thoughts on “How Kids Learn to be Bad”