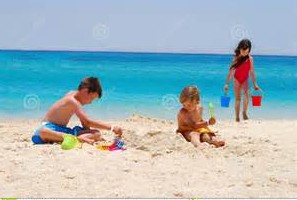 While relaxing at the beach, I could not help but overhear snippets of interactions from a very nice looking family not too far from us. Here is teaching at it’s best—seeing and hearing from an objective perspective—this time it was what NOT to do.

Here are a few disjointed pieces of overheard dialogue:

Mom: “Are you going to make me pour a bucket of water over you? Stop that whining. One more minute and that bathing suit comes off and I’m going to spank your bottom.”

She asked him to do something and he refused.

Mom: “Well then if you don’t do what I want, I won’t do what you want. I’m not giving you any Cheez-its.” To the others, tauntingly, “Who wants Cheez-its. They’re so good.” To her son, who says he wants some, “No, you can’t have any.”

Mom (taking a picture of him), “Open your eyes, butthead.”

Dad was bagging his surfboard. In response to something his son said: “That’s because you’re a weenie. You were off whining.”

When they were leaving, the boy was told to carry his bucket full of things, and he didn’t want to. Mom said he had to, and she and another woman walked off and left him. He began crying. Dad, who hadn’t heard the interaction was still behind packing his things and asked him what was wrong. Very angrily the boy screamed at him, “Nothing!” Dad: “You speak to me like that again and you’re in the water.” Dad ignored him after that. They left with the boy lagging way behind screaming all the way.

What’s wrong with this picture? All of these interactions were attempts by the boy’s parents to get him to mind—intentional parenting, right? He resisted a good deal of the time and even blasted with a rude tone and attitude. The parents saw these interactions as opportunities to further reprimand, humiliate, and control. This adorable little boy, I fear, is growing more and more resistant and defiant who, in no time at all, will leave his parents wondering, How do we control him? What happened? I’ve tried everything and nothing works.

Interactions such as these, show ever so clearly how the seeds of defiance and disobedience are nourished. As painful as they are to witness, similar dialogue often goes unnoticed in our own homes. These everyday occurrences pass by us unnoticed and unexamined but slowly build a wall between our children and ourselves. Behind that wall, children spend a great deal of time defending themselves and their integrity against an onslaught of disrespect coming at them. They learn to pass the blame, turn parent-deaf, and wake up ready for battle in guarded anticipation of blame and criticism. Then we ask, What did I do? I asked him perfectly nicely to get his sweater, and he acted like I was his mortal enemy! Totally out of the blue he screamed, I hate you!

I feel so sad when I witness situations like this one. Even when plenty of love is present, daily critical and shaming interactions from tired and frustrated parents create disconnect that become commonplace. Communication patterns build that are hard to break. And soon that child, once easily controlled, becomes our most feared nightmare.

Your child may have a compliant temperament and does as she is told to get her needs met. But, when treated like this child, she loses herself in the process—either for good or to find it in therapy years down the road. Or he may have a strong will and resists until he finally has the ability to turn things around and punish those who have punished him. Which type of child do you have? What do you foresee in your future relationship?

7 thoughts on “Parenting at the Beach”