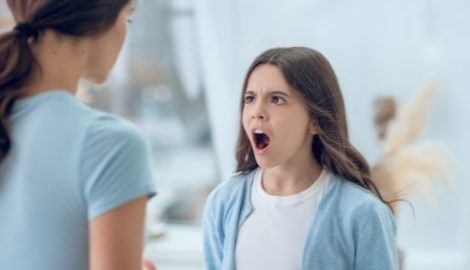 Q. I know you don’t believe in consequences, but is there ever a circumstance where a consequence is effective even when knowing the root cause of the behavior? Example: My 10-year-old son expressed this morning that he wished he didn’t have to go to school. He was moody and angry. I did some digging and turns out he hates music and it’s his first class of the day. I get it. I said missing school isn’t an option and asked if he could think of anything to make the day bearable. He was super angry and wasn’t open to hearing me and started to call me vulgar names/swears. I told him that calling me names is unacceptable—something I’ve told him many times. He stormed outside to ride his scooter for a bit, and I was left wondering if he should lose YouTube after school. Will it make him remember or think twice when he is in the red zone swearing at me? Is it just a thing parents do to feel in control when the situation feels so out of 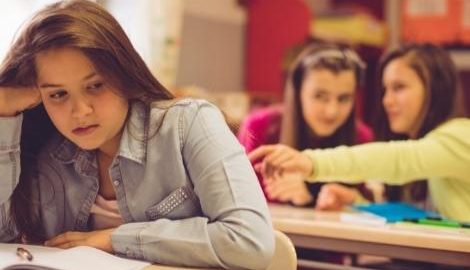 It is not easy to learn your child is being bullied. You are ready to do battle—anything to save your child from the pain and agony of daily terrorizing. Especially if you were bullied as a child. It’s hard enough to watch a sibling use age and power to overcome the wishes of the younger but a school bully, or a controlling friend is quite another thing. High emotional reactions from parents are always understandable but never helpful.

Bullying has likely been going on awhile when most parents learn of it—if they ever do. For the child, being the target of a bully is humiliating and shameful. The target does not want anyone to know. Even the most loving and accepting parent is often the last to find out for fear he may be letting his parents down. After all, to the target, he assumes it must be his fault. He must be weak and ineffective at preventing the bullying.

Therefore it is up to the parent to interpret behavioral signs. Not an easy thing to do. Changes in typical

At home, they fight the rules and argue every direction given. Parents complain they never listen, won’t do as they’re told and refuse to comply. At school

Q. How should I respond to a child (12yo) who is always late (takes too long to get dressed, takes long showers, keeps skipping breakfast because she takes too long to get ready for school) and she responds: “I am lazy”. What can I do to assist her in being more motivated to be on time?

A. The cause of being late likely has one of three motivating factors. Motivating her to be on time will require a dig into why she is always late rather than focusing on simply the fact that she is. The phrase “she takes too long” leads me to think that you are setting an expectation that she cannot meet right now—and making a judgement that she is wrong. We typically look at behavior and define it as good or bad and react to the behavior accordingly. In doing so we miss the most important factor: what provoked the behavior.

To determine what the motivating factor is in this case, you want to know:

1) Is it school she is resisting?

My proposed solution is simple: don’t waste a lot of time and money pushing kids in directions they don’t want to go. Instead find out what weirdness they excel at and encourage them to do that. Then get out of the way. ~ Seth Godin

Q. What is the best way to respond to my 12 yo son who refuses to go to school? It started after he had 2 teachers who focused on the things he couldn’t do. We eventually pulled him and put him in private school but that only worked for about a year. We pulled him altogether last year on the advice of his therapist. Virtual school was a nightmare, and we were taking care of my dying father in the house too. It was too much. He really hates school. He is super smart but has dysgraphia, ADHD and anxiety so he really struggles.

A. I imagine there are a lot of kids this pandemic has pushed to the surface who were falling through the cracks pre-Covid. The silver lining of this struggle may be

I know I’m not alone in thinking this school year would be sort of back to normal. But it’s not over yet and many believe it won’t ever be. We are in a new reality that we first believed temporary. Our kids are going back to school but this year with no option for remote learning. In some parts of the country that may seem fine, but in other parts parents feel like they’re throwing their kids to the wolves.

What kids care about is their own experience. Navigating masks and relationships back at school can be tricky for kids wondering where they stand. Friendships are likely shifting leaving hurt and unhappiness for many. Some kids are fine with masks and forget they are wearing them. Some are hypervigilant and feel unsafe if others are unmasked. And some are sensitive to masks or are simply resistant. Some worry about getting exposed. Does that mean quarantine, missing school, bringing Covid home, getting sick, ending up remote?

While they have their own physical and emotional responses to the situation, children are highly

Q. I am currently feeling like a failure as a parent. My 12 year old daughter is smart, well behaved, does well in school. However, there are 2 main areas where we fight and tempers flare resulting in a tense hostile environment at home.

1) She sneaks food. She loves junk food like cookies and chips. We have a policy at home where the kids get to choose 2 junk items from the pantry as snack after school. And the deal is they don’t eat anything later. It works in most part, but she ends up taking 1-2 extra things on the side to her room. I am worried about the impact of constant junking on her teeth & overall health. She just cannot stop herself from eating. I cannot constantly monitor her and increasing the ‘allowed’ unhealthy stuff on a daily basis is not an option.

2) The other is her watching You Tube, again without my knowledge. She has to use the laptop for homework, and I cannot baby sit while she is doing that as I have

Q. My daughter is 8 years old. She is quiet, honest, kind, diligent, and the “dream child to teach”, the teachers say. She follows every rule to the T. On the playground, one of her better friends is starting to bully her. She was crying as she was telling me about the girl telling her to go into a dark shed on the playground. My daughter said she didn’t want to as she was afraid of the dark. The girl teased her for being a cry baby and insisted. Last week this girl told her she couldn’t play with their group and pushed her tray away. My daughter is afraid if she leaves the group she will have no one to play with. What should I do? I encouraged her to say STOP! and that you don’t like the way she is treating you, but she says that is not kind and she doesn’t want to be like this girl. She ‘practiced’ saying it but sounded like a mouse. Do I speak to the girl’s parents? Embarrassing. Or directly to

Q. My 8 yr. old daughter, M, started playing with B last year and became her best friend. Towards the end of the year M became quite possessive of B. The situation escalated when B’s mother decided to “ban” B from playing with M. When this school year began, the ban was still on. I learned of it for the first time and also talked to the other mum. M was confused and angry, thought B was lying about the ban. She called her a liar and shouted at her which is very unlike M. She was still not ready to talk to me about it, so I couldn’t comfort or reassure her. It seems to me that girls this age don’t know how to play in groups at school.

I will organise more playdates for M with other friends, and keep communicating with her teacher. I find it very difficult when the other mother calls frequently to discuss this. She seems to be projecting adult expectations and anxiety onto B by daily inquisitions about life at school. So the